Every time I travel to a new country I am unsure about the tipping culture. How much am I supposed to tip? Do I have to leave a tip everywhere? And that is why in this article I want to talk about tipping in Spain. Because all countries are different when it comes to tipping. To give you an example:

I grew up in Germany, where leaving a tip of 10% is quite common. Sometimes even more, if you really liked the restaurant. But wait! Germans do not only tip in restaurants. And I know it’s common in the United States to leave a 20% tip. Then the situation in Spain will surprise you. In case you did not already know: Tipping in Spain is not compulsory, but optional.

When I moved to Spain I had no idea if and when I was supposed to leave a tip. I did not want to look like an idiot and be disrespectful of Spanish culture and customs. But after living in the country for six years I became used to their culture, even with tipping. If you feel the same right now, then keep reading. Tipping in Spain: How to not embarrass yourself!

Affiliate links may be sprinkled throughout the free content of this blog post. If you purchase from one of the links I may receive a small commission while the price for you stays the same. This helps me cover the costs of The Lithuanian Abroad. Gracias!

Other popular blog posts about Spain you cannot miss:

104 cheap or free things you can do in Madrid: This blog post is the ultimate low-budget guide for visiting Madrid. It includes free museums, parks, food places, destinations for one-day trips and so much more. So many ideas and activities to add to your Madrid bucket list!

Let’s start: Tipping in Spain, everything you need to know

Tipping in Spain: A short summary for you

To sum it up, tipping in Spain is not compulsory, but appreciated. Usually, people only leave a tip in restaurants for incredible customer service when they want to show their gratitude. There is no exact rule or percentage you have to keep in mind when dining in a restaurant in Spain. But, there are a couple of situations where you should leave a tip. Keep reading to find out when you have to leave a tip in Spain and how much is usually common.

Do I have to tip in Spain?

Even though people sometimes do leave a tip in restaurants, tipping in Spain is completely optional. Therefore, people only tend to tip if they have received great service or are visiting a fine-dining restaurant.

I want to highlight that every tip is highlight appreciated by all people working in the service industry. So if you feel like leaving a tip, you should definitely do it!

I would like to show my gratitude and leave a tip. How much do people tip in Spain?

I would say, that anywhere between 5-10% is normal. If you feel like you received outstanding service, you can leave a 15% tip, but that is really not the norm. As mentioned before, tipping in Spain is optional. So it is up to you to decide how much you would like to tip someone. There is no expected rate for tipping in Spain that you have to keep in mind. I have seen people simply rounding up or telling waiters to keep the change. Which they are always thankful for!

Is it rude if I don’t leave a tip in Spain?

If you are in a restaurant, it is not rude to not leave a tip. But keep in mind that tips are always highly appreciated! However, there are some situations where you should show a bit of gratitude and tip the person that attended to you. Let’s look at the following examples:

Tipping in restaurants in Spain:

If you are paying in cash, you can leave your tip after the waiter has given back your change.

I have read in many newspapers that tipping in restaurants is uncommon in Spain because waiters are already paid fairly. Not exactly true, in my opinion. Please keep in mind that many of these waiters do get paid minimum wage and have to work long hours, sometimes on weekends or public holidays. And let’s be honest: Receiving minimum wage while living in a big city is not easy. That is why I do not really agree with this explanation! Even though tipping is optional, every tip is appreciated. So, if you think that you received an outstanding service, of course, you can and should leave a tip!

Vocabulary you need for tipping in Spain

Other situations where you can leave a tip:

Tipping a taxi driver in Spain

It is not common to leave a tip for taxi drivers in Spain. However, if you feel like you received very good service and the driver maybe helped you with your heavy suitcases, you can round up the total sum and leave a small tip. I am sure the driver will appreciate it!

By the way, if you are in Barcelona, you will realize there is no Uber in the city. In that case, try downloading Cabify! I wrote a whole blog post about taxis in Barcelona, that you can find here.

Tipping in a hotel in Spain

Are you planning on staying in a hotel in Spain and are unsure about how much to tip porters? No problem. But first, you should know that smaller hotels usually do not have staff available to help you carry your stuff. If that is what you are looking for you should book larger international hotel chains.

If you wish to leave a tip for your porter, 1€ per bag is usually a common tip in hotels in Spain. When it comes to room service I have read that you can leave a tip of around 3€ at the end of your stay. But, to be honest with you, my family and I have left small tips for room service every day of our stay in a hotel before. And if you are staying for a long time I feel like a higher tip would be appreciated as well.

Tipping in a café / coffee shop or bar in Spain

Here again, it is not mandatory to leave a tip if you are going to a coffee shop or bar in Spain. But, you should look out for a jar or a little box with “tips” or “propina” written on it. If you would like to leave a tip, you can simply put a couple of coins into this jar.

In a coffee shop or bar, you can simply round up your bill or leave a 5-10% tip.

Leaving a tip for a tour guide in Spain

If you would like to participate in a walking tour, you should leave a tip for your tour guide. Free walking tours are very common in bigger cities in Spain. If you go there, paying between 10-30€ per person is common. That really depends on your budget and on how much you enjoyed the tour. Keep in mind that the guides of free walking tours rely on your tips.

In case you are doing a tour with a set price, you can also leave a tip. Here I would leave a couple of euros, again, depending on how much you liked the tour.

Here is the link to my favorite walking tours in Spain. They are a great way of getting to know a city in only one afternoon. And the guides are always locals!

Can I leave a tip with a credit card in Spain?

Let’s start with the good news: Paying with a credit or debit card is very common in Spain and you should not have any problems when you go to a restaurant. Usually, all restaurants have a card machine and let you pay by card, even when you would like to pay separately with your friends.

In case you would like to ask first, you can do that by saying Puedo pagar con tarjeta? Of course, when paying with your credit card you can also leave a tip. But I would recommend leaving a tip in cash. Because you never know if the person that attended you is going to receive that tip!

When paying with your credit card, before inserting it into the card machine, say Quiero añadir propina and then tell the waiter how much you would like to be charged.

And that was my blog post about tipping in Spain. I find it interesting how different tipping customs are all over the world. Hope this post was helpful for you and know you understand the Spanish tipping concept better. See you in my next post! Mallorca in Winter Guide: What to do & other useful tips 71 Quotes about Barcelona you should know about! One day in Málaga: Everything you need to know about this beautiful gem! 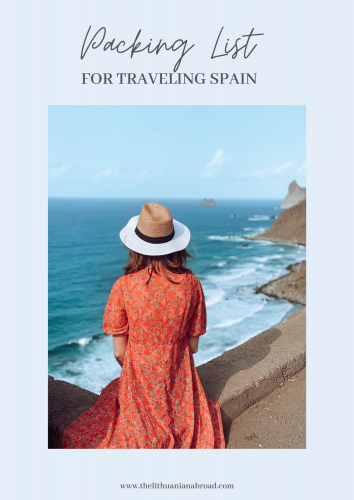 Nope! You’ll have to wait because Most restauran

What part do you love the most about supermarkets